If you live in South Florida and you’re into beer then you already know about the pandemonium that revolved around Funky Buddha’s first bottle release for Maple Bacon Coffee Porter. While this event probably won’t be quite as crazy, I’m sure that this release for Nib Smuggler will be busy and those 500 bottles will go quick. Be sure to get there early as it will be first-come, first-served!

If you are unable to make it but would still like to get a taste of the beer, check out Brown Distributing’s Beer Finder to find a retailer near you that has purchased some. All you have to do is select Nib Smuggler in the brand menu, then type in your zip code and the number of miles that you’d be willing to drive to get some. 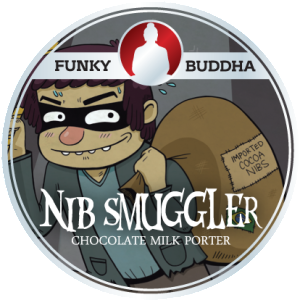 We’re proud to announce that Nib Smuggler will be our next beer landing in bottles! Our sinfully delectable Chocolate Milk Porter is arriving on Thursday, March 6 in a limited run of 22 oz. bottles. This run of 500 will be sold exclusively at the brewery beginning at 6pm. There will be a one bottle per person limit*; bottles will cost $12. To honor Nib Smuggler’s release, we will be tapping some other special beers (including the latest batch of Nib Smuggler) in the tap room. You will also be able to drink Nib Smuggler on draft at bars and restaurants throughout South Florida beginning in late February.

See you at the brewery on March 6!