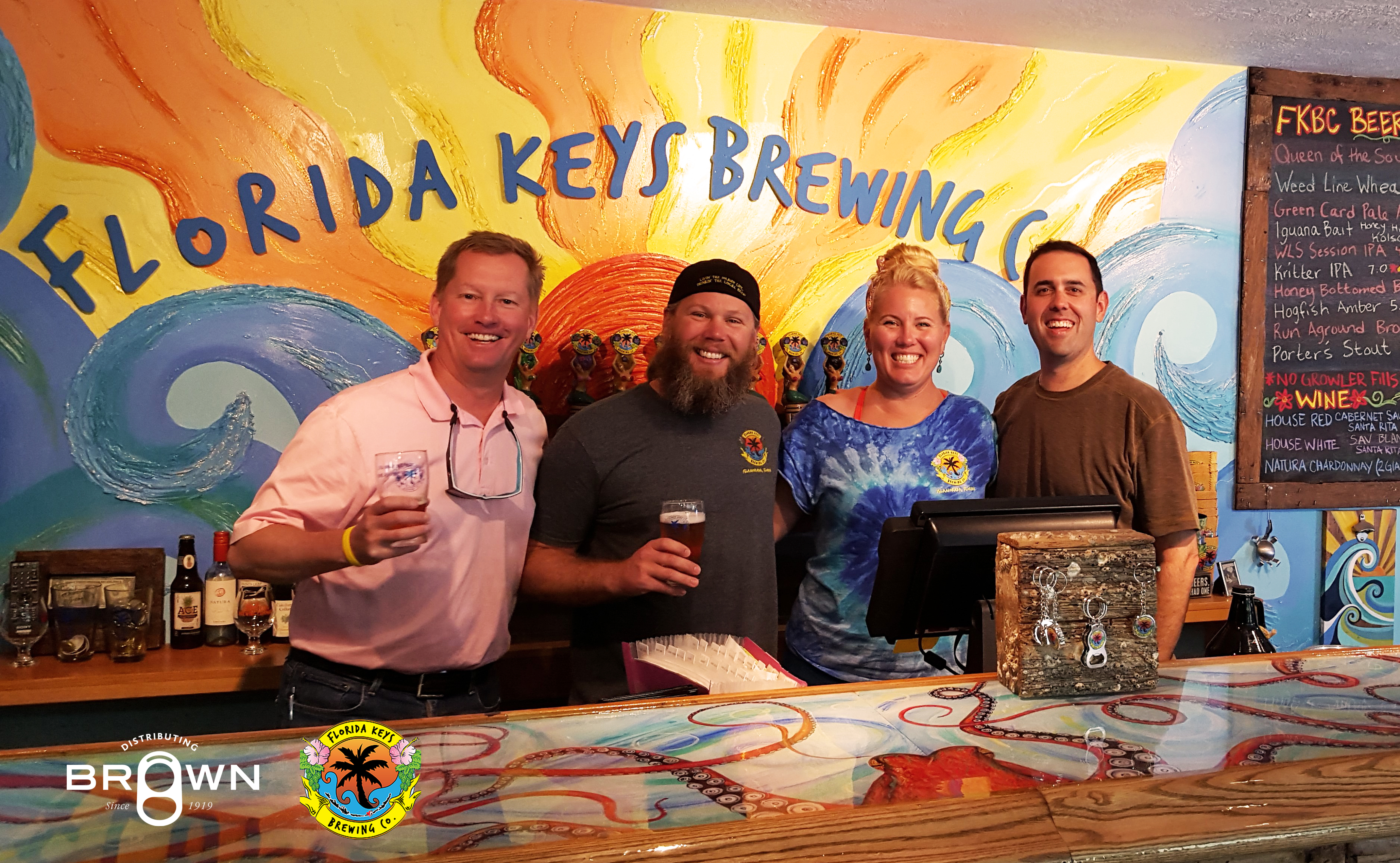 Florida Keys Brewing Company of Islamorada, Florida is a true, island brewery making the jump into distribution. Owners, Craig and Cheryl McBay formed the company in 2012 and opened their doors in Feb, 2015 with the vision to bring The Keys a genuine local beer. Cheryl, a native Conch, and Craig, a transplant from Canada, met in the Keys (down the street from their brewery) in 2007. After moving to West Palm Beach for a couple of years, the couple decided to move back to Islamorada to open Florida Keys Brewery. As a true family business, Craig focuses his efforts on recipe development and production while Cheryl spearheads the branding and overall marketing, which is clearly influenced by her upbringing in the keys.

Florida Keys Brewing is located in the Morada Way Arts and Cultural District of Islamorada and prominently features local painters and furniture builders around their building and in their taproom. They have become a keystone for the Arts district, which hosts a monthly art walk. FKBC currently produces their beers on a 1.5bbl system with 5, 3bbl fermenters. In the midst of a major expansion, their beers will soon be available outside of just their taproom.

Their new 20bbl system complete with 4, 40bbl fermenters was purchased from Red Hare Brewing out of Marietta, Georgia will be capable of pumping out an estimated 3,800 bbls annually. The expansion is expected to be complete in July, 2016 with beer available at retailers by the end of August, 2016.

Florida Keys Brewing Co will begin by offering 3 products on draft, which will include their Hogfish Amber Ale, Sunsessional Session IPA and Iquana Bait, a honey hibiscus kolsch. Craig provided some insight into these offerings, “These have been the best selling beers in the tasting room and we felt these would fit best in the bars and restaurants right now”. They offer and will continue to offer a variety of other options in their taproom. “We love our brown ale but thought it may be a little dark and might not move as well as the others”. Although their products will be draft-only initially, growlers are available to-go at the brewery which is open everyday from noon-10pm.

When looking for a distributor, Craig and Cheryl took a lot of time to find the right fit. “Brown’s focus on craft and small breweries matches really well with what we are trying to do.” FKBC will find a unique place within the Brown portfolio as they are producing 100% of their beer, right in Islamorada. “Brown has a great portfolio, we like all of the breweries in the book and want to be next to them”. FKBC will initially be offered in Islamorada and around Monroe County. The idea is to bring the beer to the Keys first. Speaking as true locals, Craig and Cheryl explained “We want to keep the beer local…we want the people here to have it first”.

Brown’s Director of Marketing and Brand Management, Ian Salzberg, shared their enthusiasm for this partnership. “The folks at FKBC are some amazing people, making unique, handcrafted beer and we couldn’t be more excited to have them in the Brown Distributing Family. We have been talking for a while, shared quite a few beers and we can’t wait to work together to bring their beer to retailers around the Conch Republic.”

Brown Distributing and Florida Keys Brewing Company will be hosting brand launches at various retailers at the end of August and at The Key West Brew Fest in September. For more information on their products and events, visit FloridaKeysBrewingco.com and Brown.com.