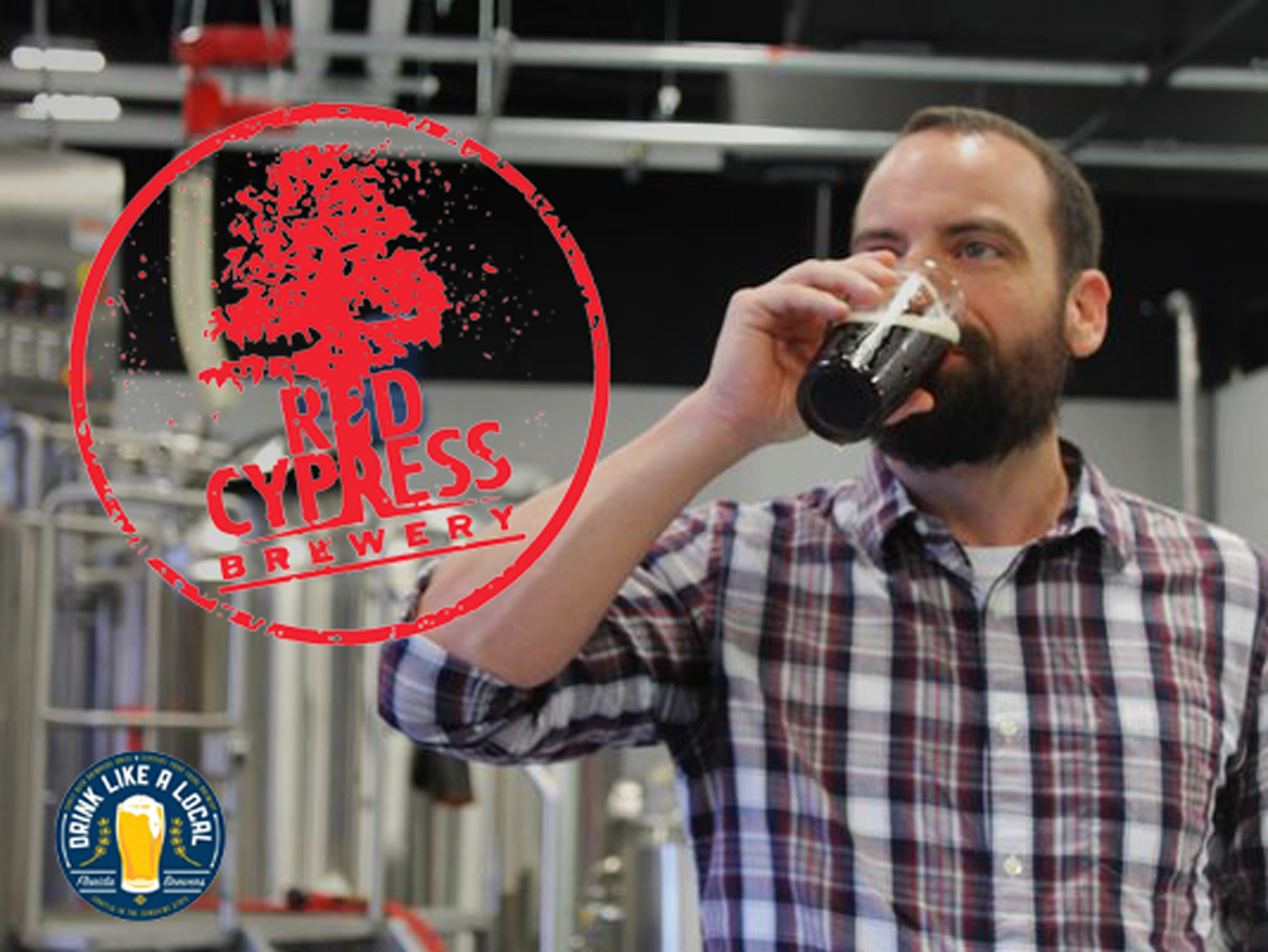 Shortly after moving back to Orlando, UCF husband-and-wife team, Ryan Parker and Ashlan Clover, were struggling to reach a compromise on their plans for a kitchen renovation project.

So they washed those dreams down the drain, and settled on a brewery.

For Parker and Clover, their love for craft beer had always brewed deep, but it was upon noticing a lack of craft brewers in the area that they were inspired to invest in the industry.

“I haven’t been nervous about it at all, it’s just been excitement from the very beginning,” said Parker, a 2009 English education alumnus. “We know with how serious we’ve been taking this whole project, we’re only setting ourselves up for success.”

In the taproom, which opened six months ago, Red Cypress serves a rotation of eight of its brews, which Parker said reflect their style.

Beyond that, the facility extends to a production room, fully equipped with the hosing and space needed to scale the company’s distribution, which will officially begin in January with 50 accounts in Central Florida.

“We want to be one of the Florida breweries, and the brewery of Central Florida, so when people think of Orlando craft beer, we’re the first name that comes to mind,” Parker said.

But since the company’s birth in 2013, the local craft beer industry has grown, and Clover said the Orlando-native team at Red Cypress is hoping to differentiate itself by engaging with the community.

“I know a lot of people think, ‘Oh you own a brewery, you must be alcoholics,’ but it’s not like that. There’s passion behind it, and we want to share that with the community,” said Clover, who met Parker while she was an elementary education student at UCF.

Although the main ingredients used in beer, such as hops, can’t be grown in the Sunshine State, Parker works to infuse Florida flavors in every beer.

Some of these include the saison brew, which has Florida orange peel, and their Honey Brown ale brewed with 200 pounds of local honey from Webb’s Honey.

“I think that craft beer in itself is trying to grab the area, and for us to be local and have a local team running everything, it shows that we want to be part of the community,” Clover said.

The duo, backed by Parker’s father, founded the brewery with the intent of, not only transforming it into a community staple, but also a destination brewery — somewhere people would want to visit.

So they hired UCF Rosen alumna Andrea Bernardo, who developed the tour program at Tröegs Brewing Company in Pennsylvania, which went on to be ranked the sixth best brewing tour in the country by USA Today’s Reader’s Choice Awards. As the taproom manager, Bernardo will also be developing the tour program at Red Cypress.

“From grain to grass, we want to engage guests all throughout the experience,” she said. “People really enjoy being immersed in the process, so that’s something that I’m looking forward to bringing here, is that immersive experience to our guests in Central Florida.”

“Everything we’ve done has been a really thoughtful decision,” Parker said. “She’s going to be putting together our tour program, which we’re really, really excited about, and all of those things are the kinds of details that we hope to bring in to create a true craft beer experience.”

Among those other things is the attention to quality control emphasized at Red Cypress, for which they are recruiting the help of UCF’s Applied Industrial Microbiology program for a mutually beneficial partnership.

“With Ryan, the plan is to have the students work in their brewery in the microbiology lab, which is not yet built,” said Dr. Sean Moore, director of the program. “For now, we’re training them in our lab, but the idea is to take this basic training and connect it with regional industries.”

Parker said he is currently getting a lab in place at the brewery to ensure that quality control is on point and the brews maintain consistency in flavors and body.

“We’re obviously laid back — it’s craft beer — but at the same time, we’re actually very, very serious about our product,” he said.

The environment at Red Cypress is, in fact, more laid back than his other job at a healthcare IT consulting firm, where he’s held a managerial position since before opening the brewery.

But through it all, Parker’s main role is raising a family with Clover.

“Opening two weeks after we had our third son was very chaotic,” Clover said. “We both work very long hours, and trying to balance everything is difficult at times. But it’s also very rewarding, when you come into the taproom and you see all the other families with their kids, and we’re there with our kids, it’s a really nice feeling.”

Daniela Marin is the Entertainment Editor for the Central Florida Future. Follow her on Twitter at @dan__marin or email her at DanielaM@CentralFloridaFuture.com. The original article can be found here: http://www.centralfloridafuture.com/story/entertainment/2015/12/04/ucf-team-opens-new-craft-brewery-winter-springs/76741320/