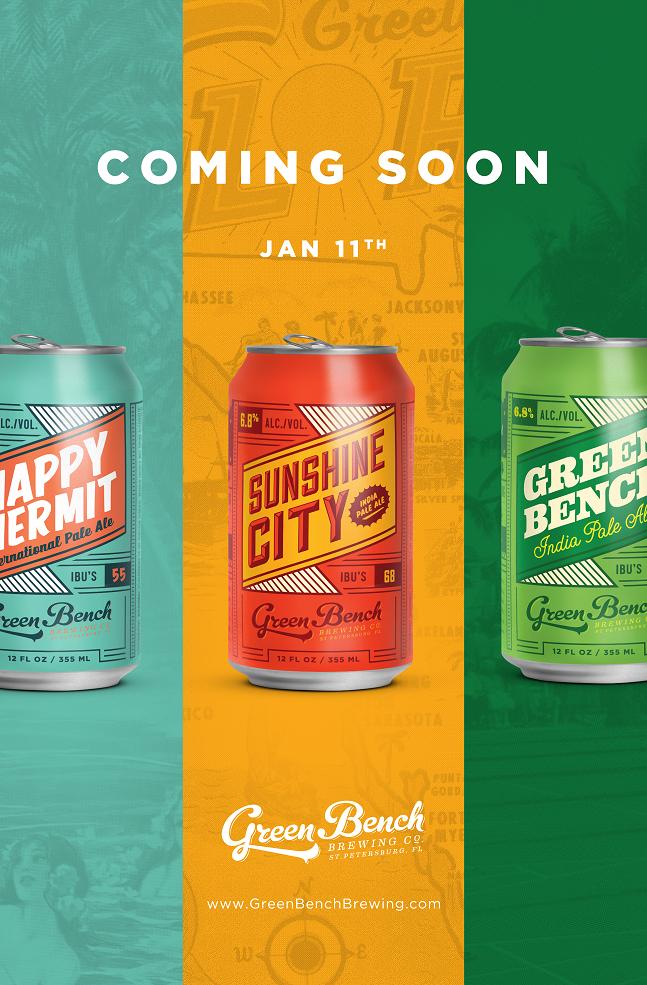 Green Bench Brewing, in beautiful St. Petersburg, FL, is releasing cans of three different beers into distribution this month. They have recently gone through an expansion, which has doubled their capacity, while putting an intense focus on maintaining their consistent quality and increasing volume.

“It is exciting to announce that within a couple of very short weeks, all of our hard work and dedication will be find itself available to our local consumers throughout the Tampa Bay Area and Orlando in the form of canned core products. We’ve spent the last six months investing in and installing new equipment, infrastructure, and lab resources that have been used to test products several times over to ensure that the highest level of process and quality could be met at the launch of this new packaged format,” says Brewmaster, Khris Johnson.

The can release will feature three core beers:

Sunshine City IPA – 6.8% ABV
A Pacific Northwest-style American IPA that is double dry hopped with Citra, Azacca, and Mosaic hops, with a focus on intense hop flavor and aroma reminiscent of citrus and tropical fruits. This beer was greatly inspired by some of the new wave IPAs coming out of Washington and Oregon that highlight hop aromas and flavors more than bitterness.

Green Bench IPA – 6.8% ABV
A classic West Coast-style American IPA that is double dry hopped with Simcoe and Centennial hops whose character is dank, piney, earthy, and resinous. Green Bench IPA is inspired by the old school, San Diego IPAs that put American craft beer on the map. The aromas are intensely pine and resin forward and they end with a clean and lingering bitterness.

For more info on the release, and to learn more about Green Bench Brewing Co., please visit their website here.