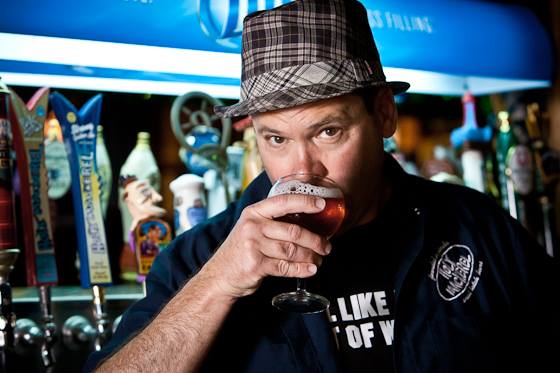 After about a 5 year hiatus Bobby Gordash is back once again at Holy Mackerel, now Holy Mackerel Small Batch Beers, after selling the business in 2011 to a Fort Lauderdale local, who eventually decided the business was not for him. “It happened so fast, I was shocked at first, but I am excited now and it feels like being back at home,” said Bobby.

Holy Mackerel was started by Bobby back in 2007 with their Special Golden Ale, after winning the Samuel Adams World Home Brew Competition in 1997. In the ten years between winning the competition and opening the brewery, Bobby began specializing in Belgian-style beers, with friends urging him to move from hobbyist to professional.

After opening the brewery, Bobby worked as a one-man operation while keeping his other job as a sales representative for a local craft beer distributor, Fresh Beer, which is now Brown Distributing. In 2011 he made the decision to sell the brewery and focus on some consulting and sales work with Florida Beer Company, and Hollywood Brewing Company.

We can certainly expect to see some changes with Bobby’s return to Holy Mackerel, he is coming back with a fresh pair of eyes that have seen the back end operations of the beer business in Florida when it comes to distribution and operations. Holy Mackerel Small Batch Beers will continue to be contract-brewed at Thomas Creek in South Carolina with the original three brands: Panic Attack, Special Golden Ale, and the occasional Mack in Black, a Belgian Imperial Stout.

On top of that Bobby is hoping to start working on another line soon that would include test batches and “fun stuff” he says. The new operation would also include a restaurant and nano-brewery and be located in West Broward county. This, as well as Holy Mackerel Small Batch Beers will be not affiliated with The Mack House in Broward moving forward, but still has many great beers on tap.

Make sure to stay posted on news with Bobby Gordash and Holy Mackerel Small Batch Beers by check back soon! Also, stop by Riverside Market South for “The Mack is Back” Holy Mackerel spotlight on Friday, January 29 at 6:00 PM. Check here for more details.

To read more about Holy Mackerel check out this article by Broward Palm Beach New Times, and see their website here. Follow them on Facebook below: