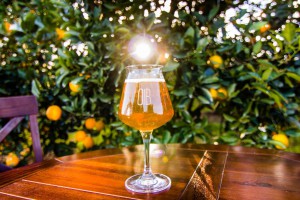 About two and a half hours north of Miami, there’s a small brewery where every beer on tap is made with citrus.

Calling itself a “grove to glass craft beer project,” Orchid Island Brewery views itself as the Floridian equivalent of a Belgian farmhouse brewery. The company pays homage to Florida’s rich history of citrus growers by sourcing grapefruit, oranges and other citrus fruits from local growers. 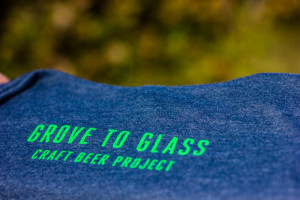 “I fell in love with the idea of utilizing local resources to make a beer truly related to where we come from,” said founder Alden Bing.

The area where Bing has established his grove to glass brewing operation is known as the Indian River Citrus District, a 200-mile strip of land recognized for supplying about 75 percent of Florida’s grapefruit crop.

And while the brewery’s proximity to citrus fruits has inspired hop-forward creations like Star Ruby Imperial IPA and East Coast Ruby IPA, Bing is far from the only U.S. craft brewer trying to brew with tropical fruit.

But that list doesn’t begin to capture just how widespread citrus infusions have become. It also doesn’t include market entries from three of the largest craft breweries in the country – Boston Beer, Sierra Nevada and New Belgium.

Boston Beer is the largest craft player to jump on the trend, launching its Rebel Grapefruit IPA – which founder and chairman Jim Koch described as “the perfect marriage of citrus and bitterness” – nationwide in February.

“You know when Sam Adams is reacting, it’s got everyone’s attention,” said Harpoon founder Dan Kenary. Harpoon itself will replace its summer seasonal kolsch with a fruit-forward pale of its own this year: “Camp Wannamango.” And that’s after brewing up an earlier citrus hit with its wheat-based, Grapefruit-infused UFO, Big Squeeze Shandy.

For its part, Sierra Nevada launched a Tropical IPA spring seasonal that isn’t actually brewed with any fruit but derives flavors of mango, papaya and bitter orange from Citra, Mosaic and El Dorado hop additions.

Then there’s a parade of regional players: Abita, Magic Hat, Green Flash, Boulevard, Heavy Seas, Schlafly, Victory, Uinta, Starr Hill and many others have made forays of their own, layering flavors of grapefruit, tangerine, mango, and passion fruit on top of hops bred specifically to showcase citrus flavors and aromas.

“The genesis of this, in my opinion, are three really specific hop varieties – Amarillo, Citra and Galaxy,” said Robbie O’Cain, brewmaster at Virginia’s Starr Hill Brewery, which will begin shipping a grapefruit session IPA in May. “Before we ever started adding fruit, these three varieties gave this citrus quality to beer. Now we can use actual citrus to create another layer of complexity.”

In interviews with eight U.S. craft brewers, the idea of enhancing or punching up bitter hop characteristics with citrus fruit – most commonly zest, peels and purees – emerged as the resounding rationale for the surge in fruit-forward IPAs hitting the market.

“Tropical and citrus fruit makes a lot of sense because you are already getting a lot of the flavor and aromas from these Australian and New Zealand hops that people are in love with right now,” said Jeremy Danner, an ambassador brewer with Boulevard Brewing.

But there’s also a more scientific explanation for why so many brewers are trying to marry citrus fruits and Citra hops: they carry many of the same taste and aroma compounds. 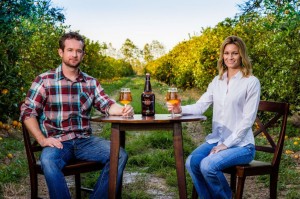 Since launching Orchid Island Brewery last September, Bing has spent countless hours studying the relationship between the hops and citrus. But he’s not the only one: in his quest to understand the best methods for incorporating citrus fruits into his beer, Bing discovered a 2010 research study published in theJournal of the Institute of Brewing.

Produced by a group of Japanese brewers, scientists, and experts in molecular biology with Sapporo Breweries Ltd., the 10-page report – The Contribution of Geraniol Metabolism to the Citrus Flavour of Beer – explores the parallels between hop oils and those found in citrus fruits.

The findings were hardly surprising. Of the six hop varieties tested, the researchers found that Citra hops – a popular hop variety being used by many U.S. brewers – contained the highest levels of geraniol, one of the primary compounds (along with citronellol and linalool) contributing to citrus flavors in beer

Not coincidentally, many of those oil compounds and others that are found in hops also occur in grapefruit and a variety of citrus fruits.

Scientific findings notwithstanding, there seems to be a more practical pursuit at play: even their subcategory’s rapid growth won’t offset the decline of the big brewers, so ultimately, craft brewers need to recognize they need to reel consumers back into the beer category. Since 2000, beer has steadily lost share to a spirits segment that has grown to more than 35 percent of total alcohol sales.

“You look at a bar, and there is a bunch of cocktailing going on,” said Kenary. “The younger consumer is really open to mixing and matching. If you are into cocktails, you are definitely into lots of different flavors. I think that some of these products are a way to get at these cocktail drinkers and pull them back into the beer world.”

And the perfect way to accomplish that, at least many brewers’ eyes, is by offering something familiar.

Brian Thiel, the co-founder of Ghostfish Brewing in Seattle, feels that the small addition of grapefruit peel to his company’s top-selling Grapefruit IPA gives the product broader consumer appeal.

“The citrus flavor profile appeals to people who really like really like the aromatics of an IPA but don’t gravitate toward the harsh, danky bitterness of hops,” he said.

Boulevard’s Danner echoed those words, saying “you can get the benefits of fruity hops without having a beer that is over-bitter.”

It’s far too early to tell if a fruit-forward flavor profile can help craft brewers reach more mainstream drinkers, but Bing is certainly optimistic, and for now, the numbers seem to reflect it.

“There are a lot of different adjuncts being used in beer right now,” he said, “and it seems to me that citrus is an ingredient outside of the traditional four ingredients that can stand the test of time.”

Editor’s Note: This story appeared in the March issue of BevNET Magazine

Featured on Brewbound by Chris Furnari on March 9, 2016

Brewbound also convenes industry leaders twice a year for the Brewbound Session. Providing brewers with a detailed look at the business of craft beer, our full-day conferences in 2015 will take place in Chicago, during the second quarter, and in California during the fourth quarter.

Published by BevNET.com, Inc., a leading business-to-business media company in the beverage space, Brewbound aims to be a leader in the craft beer space, providing information breweries and consumers can trust as factual content rather than rumors heard on blogs or forums.