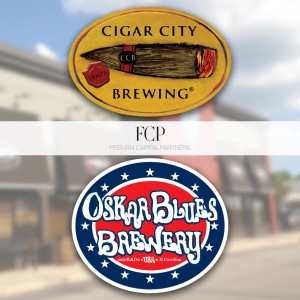 Together, the five craft breweries make up what the firm calls United Craft Brews LLC., a holding company and special purpose fund set up specifically for craft brewery acquisitions.

Terms of the deal were not disclosed and the transaction is expected to close within the next 90 days, executives from both companies told Brewbound.

With the Cigar City pickup, Fireman Capital, via the United Craft Brews consortium, squarely positions itself as a formidable force within the craft sector. Collectively, all five companies produced more than 320,000 barrels in 2015 and ranked as a top-15 craft producer. In addition to its presence in Utah, the group has beachheads in the major craft markets of Colorado, North Carolina, Michigan and Texas.

“It is certainly part of the strategy,” Oskar Blues founder Dale Katechis told Brewbound. “It isn’t the leading goal, but it does make sense from a business standpoint to put together a network across the country.”

A sale to Fireman Capital also marks the end of a long-rumored acquisition regarding Cigar City. The blogosphere thought it was headed for Anheuser-Busch InBev and, for a while, brewery founder Joey Redner thought that was happening as well.

According to Redner, Cigar City was in serious discussions with A-B InBev and had even signed a letter of intent with them in late 2015. In doing so, the smaller brewery had also agreed to an “exclusivity” clause that prohibited it from negotiating with other potential buyers, Redner told Brewbound.

In other words, if A-B wanted to make a formal offer for Redner’s business, it could have done so without the fear of being outbid.

But a potential deal fell through after A-B neglected to send a formal purchase agreement before the exclusivity period expired, Redner claims, enabling Cigar City to entertain other offers.

The deal with Fireman came together over the last two weeks, he said.

“We’re focused on the beers, brands and cultures of our eight craft partners within The High End, not on any speculation in the marketplace,” he said.

A sale to Fireman Capital gives Redner’s father and business partner, Joe Redner, liquidity for his 44 percent stake in Cigar City. It also allows Joey Redner to “take some chips off the table,” and become an equity partner in United Craft Brews.

“I am rolling up a percentage of the proceeds that I will get from my equity into the holding company that owns all of the breweries,” he said. “I am still very much invested in Cigar City Brewing, but also now the rest of the UCB portfolio.”

The deal also gives Cigar City access to Fireman’s financial resources as well as potential brewing capacity at Oskar Blues’ facilities in Longmont, Colo., Brevard, N.C. and a third, yet to open brewery in Austin, Texas.

“There is a great deal of growth potential,” Katechis said. “Our model is to find breweries that fit the criteria: a lot of potential for growth, quality beers, irreverence and wanting to do things outside of the box in anti-corporate environment.”

“For me, it was a comfort level thing,” he told Brewbound. “The concern I had was that it just wouldn’t be the right fit. We had plenty of talks with A-B, and they treated us very fair throughout the process. They were surprisingly easy to deal with and, individually, they are all stand-up people. But I just felt like it wasn’t the same cultural fit.”

As someone who admits to having never existed in a “corporate” environment himself, and as a business owner who built his own company on laissez-faire, anti-corporate philosophies, Redner had reservations about turning over control of Cigar City to the world’s largest “corporate” brewer.

“I just didn’t think personally I would be able to do it, and I didn’t think the culture that we built would survive the deal,” he said.

But once a letter of intent was signed, there was virtually no turning back. Redner refused to take on bank debt to grow his business and, with surging demand for products like the popular Jai Alai IPA and Florida Cracker Belgian-style White Ale, he needed cash to scale a capacity-constrained, 60,000-barrel beer brand.

Redner began what he described as an “exhaustive process” of vetting potential buyers in early 2015, and that’s when the company first met with Katechis and Fireman Capital, among other interested buyers.

“We talked to just about everyone that is active in the space,” Redner said.

But when talks progressed with A-B, and Redner agreed to the letter of intent, all of the other conversations had to stop.

While A-B was performing it due-diligence, however, Redner said he began having second thoughts.

“I was almost at the altar with someone else, but it never felt 100 percent right,” he said. “It was a potentially life-changing opportunity and ultimately, I thought that I wasn’t going to be happy. No amount of money was going to make me happy.”

A deal with Oskar Blues and Fireman Capital, he said, will allow Cigar City to preserve a culture it has worked hard to build since launching in 2009.

“They view the world a little more like we do,” Redner said. “They can still teach us a lot about how to grow brands and how maintain them for the long-term. We are getting the next level skill set we need, without the stuffy corporate structure.”

“They have done something that we haven’t done — capitalize in their home market, in a short period of time, like we were not able to do,” he said. “We both bring something to the game. We have aligned interests.”

Privately-backed rollups have emerged as a popular option for craft brewers looking to sell to someone other than a large domestic or international beer company. Last month Victory Brewing and Southern Tier merged to form Artisanal Brewing Ventures, which is backed by Ulysees Management, a New York family office. Enjoy Beer LLC, meanwhile, which last year acquired Abita Brewing and has stated its intent to purchase other craft brewers, is backed by San Francisco private equity firm Friedman, Fleischer & Lowe.

2015 was a record year for mergers & acquisitions in the craft space, with more than two dozen deals announced.

Arlington Capital Advisors, which also worked with Victory, Dogfish Head and Abita in their recent transactions, acted as a financial consultant to Cigar City.

This article was originally featured on Brewbound. See the original article here.