Florida is one of the fastest growing craft beer markets in the country, and with that we are happy to announce that for the first time, there will be an annual summit tailored to craft beer professionals in this area from August 31st to September 2nd. The Florida Craft Beer Summit will be an opportunity for distributors, brewers, and retailers to network and learn about the craft beer culture here in Florida. 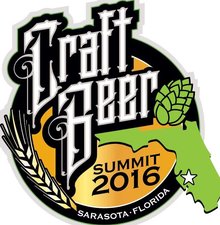 “Classes, lead by industry professionals will give brewers additional tools to better their respective breweries. Beginning with a Southeast craft beer “State of the Union”, presented by Bart Watson, Chief Economist of the Brewer’s Association (BA), the summit goes on to share stories of some of the most well know breweries in the industry, told by the founders themselves. Moreover, panelists will lead classes providing insight that will assist the attendees in bettering their business.”

Here are the classes for the summit:

The event will be held at the Hyatt Regency Sarasota, so make sure to register today!

For more info on the Florida Craft Beer Summit check out their website here.