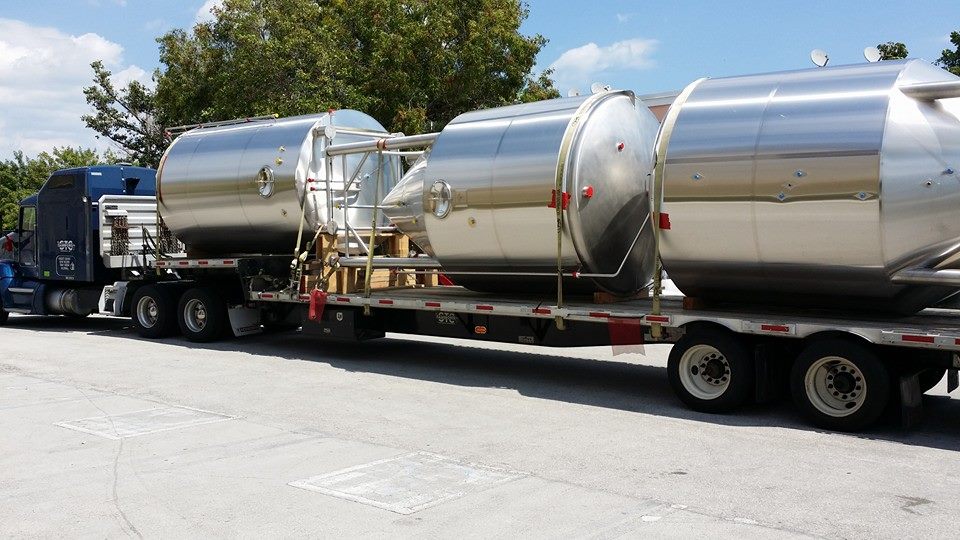 In the past two weeks new brewing equipment has arrived at Wynwood Brewing Company in Miami and the Funky Buddha Brewery in Oakland Park. Both of these breweries are less than a year old and already in need of expansion to keep up with demand in the market. And they’re not even out of South Florida yet.

Wynwood is brewing on a 15 BBL brewhouse. The new tanks (four 30 BBL fermenters, plus two bright tanks: one 30 BBL and one 60 BBL) will more than double their current capacity. This should take some of the pressure off of the production of their flagship beer, La Rubia Blonde Ale, and allow them to add two popular new beers (Magic City Pale Ale and BTM Wheat) to their current stable of year-round offerings: Wynwood IPA, Pop’s Porter, and the aforementioned La Rubia Blonde.

Funky Buddha has a 30 BBL brew house but just added two 120 BBL fermenters that will be dedicated to their flagship beers, Floridian and Hop Gun. They will have to brew four batches of each beer to fill a single tank, but this should pave the way for more 30 and 60 BBL batches of the rest of their beers. This expansion will also double their capacity and allow new seasonal beers to be brewed. If all goes according to plan this will hopefully allow them to expand into the Orlando and Tampa markets soon.

Stay tuned for expansion plans from two of South Florida’s other breweries: Due South and Tequesta Brewing Company.