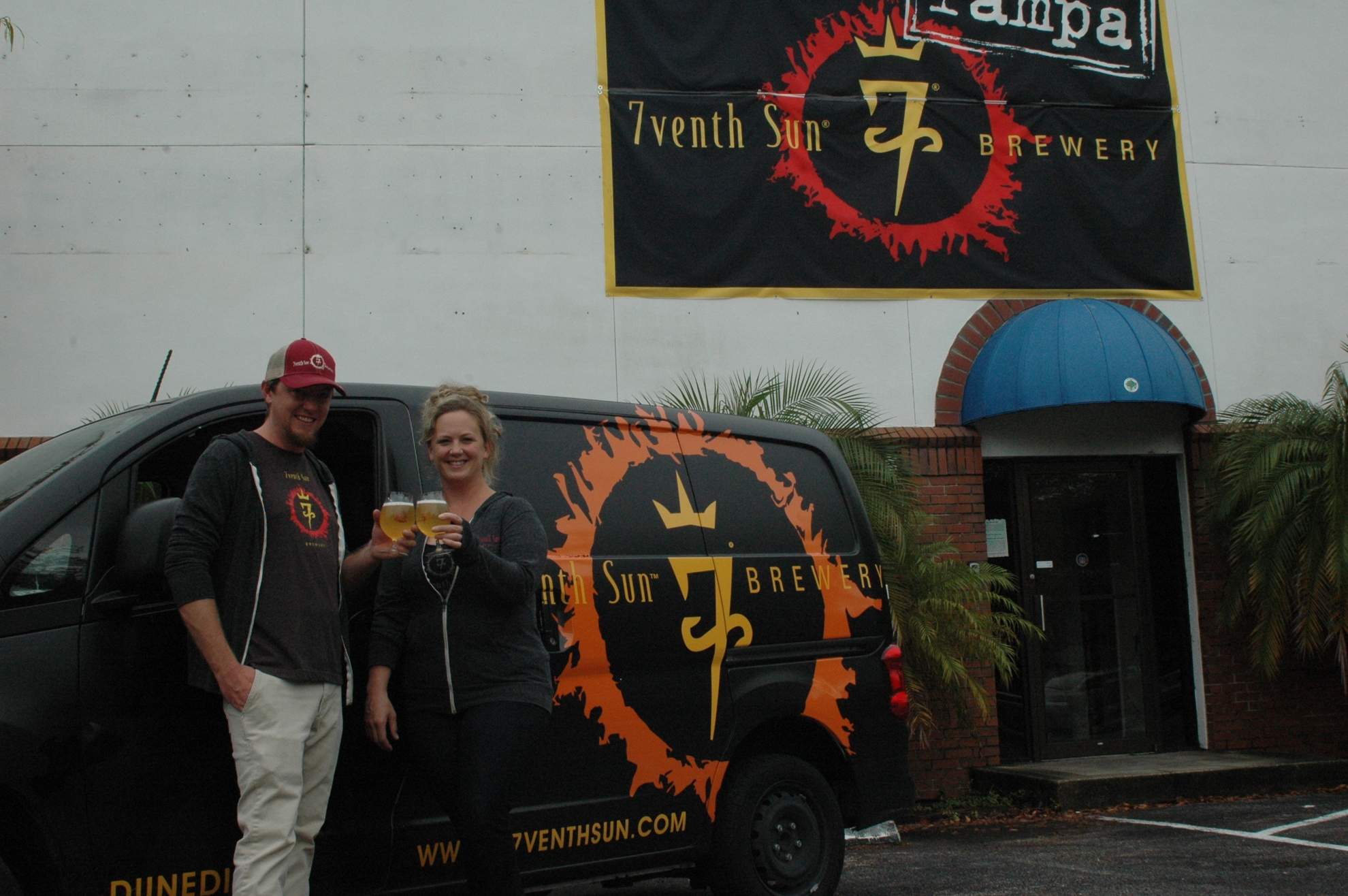 SEMINOLE HEIGHTS — With every month that goes by, Tampa Bay becomes more and more synonymous with the words “craft beer.”

Whether you’re looking to sip on a Belgian Tripel at a cozy tavern, say, Independent Bar and Cafe, kick back a German Cupcake Stout at a neighborhood brewery, say, Angry Chair Brewing or take the edge off with a citrusy IPA before heading out on a flight from Tampa International Airport – Cigar City Brewing – there is literally a dozen options to get your fix of barley, hops, yeast and water.

7venth Sun Brewing, a 4-year-old brewery based out of downtown Dunedin, will soon be the newest spot in Seminole Heights, where locals and tourists alike can enjoy some cold ones. According to owners Devon Kreps and Justin Stange, the brewery’s success in Dunedin allowed them to expand to their new location in Central Tampa.

The original 7venth Sun, with its snug 1,000 square-foot storefront, can only handle a few customers in its tap room, but it has a solid reputation around town for its “farmhouse brewing” techniques. Barrel aged beers, Belgian ales and fruity saisons are some of their more popular beers.

“You hear other brewers say the same thing,” Kreps said. “But we brew the types of beer that we love to drink.”

Stange and Kreps will split their time between the two breweries while they refurnish and rehabilitate the Seminole Heights building, located at the corner of Sligh and Nebraska avenues. The duo hopes to open the brewery sometime during the fall.

“Our success in Dunedin has helped our growth 100 percent,” Stange said.

The new, much larger location could allow the brewery to step into the same league as the big boys in Tampa Bay. Previously, 7venth Sun’s distribution was bottlenecked due to its smaller size. That won’t be a problem at the new facility.

The new location is 18 times larger in size and has capacity for more than 300 beer drinkers in its tasting room, as well as the patio. It also will sport a much larger parking lot than the Dunedin location.

Fans of 7venth Sun’s suds will be happy to hear that the brewery’s flagship beers, including Timebomb Session IPA and Graffiti Orange creamsicle-flavored wheat beer, are here to stay. Plus, the added space will allow for bottling, canning and aging of the beers in a Belgian style. The increased space, Stange says, goes along with quality control and consistency, too.

“We’re still going to be brewing a lot of the same beers,” said Kreps. “But with the larger space, we’ll be able to have room for aging. … It’s going to relieve a lot of pressure from the Dunedin location.”

Yet, it is the sheer volume of beer that the brewery could produce that is the most impressive.

Currently, the Dunedin location is outfitted with a system that only allows the business to brew 850 barrels of beer each year.

The new location, once it reaches its second phase of production, would be able to make up to 25,000 barrels of beer annually. That’s not exactly Cigar City territory at more than 44,000 barrels, but it’s still some serious potential from the planned 10 and 30 barrel systems. In terms of brewing capabilities, it could eventually make the brewery the third-biggest beer maker in the city of Tampa, behind only Cigar City and Coppertail Brewing Co.

According to the owners, it’s not their primary intention to brew as much beer as possible, but the increased size will give them room to grow in the future.

Both Kreps and Stange admit they wanted the original location to be in Central Tampa, because of their fondness for the neighborhoods, but the tight-knit beer community in Dunedin attracted them to its downtown district.

7venth Sun joins Angry Chair, Brew Bus Brewery and Southern Brewing & Wine as the newest beer-brewing neighbors in Central Tampa. All of the breweries are located within the 3.52-square-mile neighborhood that makes up Old Seminole Heights.

“When you get craft breweries near one another, it helps out each other. It makes it a cool destination,” said Stange. “Everyone has their own focus and we have ours.”

The new brewery is at 6809 N Nebraska Ave. For more information on 7venth Sun, visit its website at 7venthsun.com.

This article was originally posted at TBO The Tampa Tribune by Sean Bowes, a special correspondent. You can read the original article here.