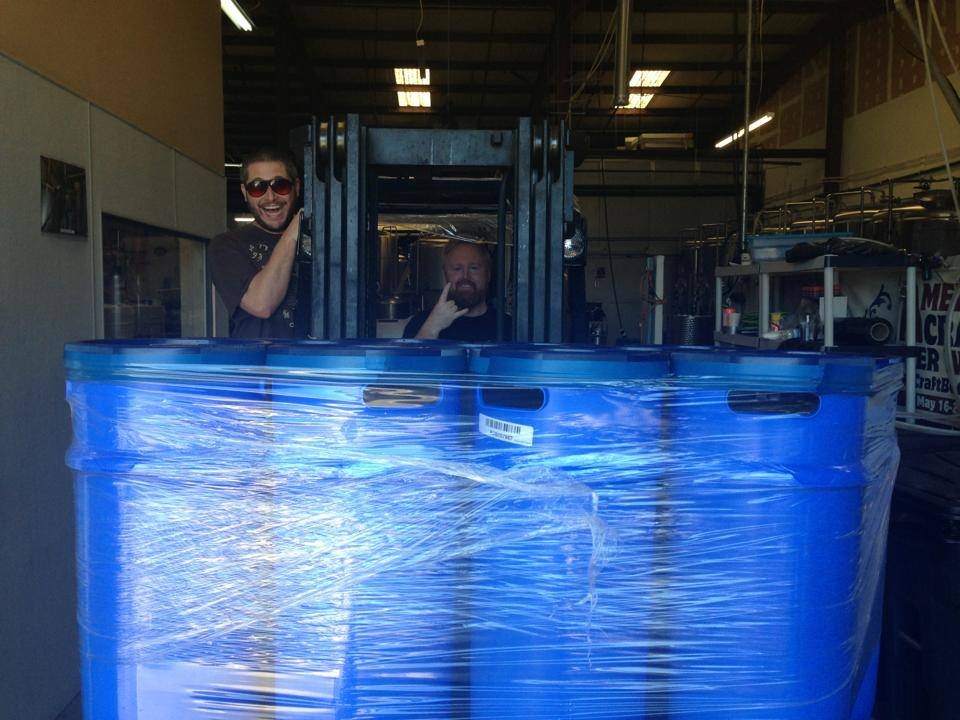 Angry Chair Brewing Company of Seminole Heights might be new but they aren’t new to the game. Co-founder Ryan Dowdle and brewing partner Ben Romano both hail from Tampa Bay’s largest craft brewery, Cigar City Brewing. Together with Co-founder Shane Mozur, Angry Chair is looking to make it’s own mark on Tampa Bay’s beer scene. Ryan who has spent years working in Cigar City’s tasting room will be handling much of the day to day management of the company as well as the tasting room and overall customer experience. Shane, currently working as a project manager at a financial institution, will help to manage the finances and guide the business decisions of Angry Chair, not to mention as an active home brewer he will be actively involved with all other areas of the company while Ben will be focusing his attention on the quality of the beer. Ben, having worked as a brewer at Cigar City, has developed a handful of unique recipes and is known best for some of his decadent imperial stouts like German Chocolate Cake and Tiramisu Imperial Stout as well as his Torcedore’s Series India Pale Lager.

Angry Chair will begin their endeavor on a 10 barrel system with one,10-barrel and three, 30-barrel fermenters which will give them a capacity to brew 1,000 – 1,200 barrels of beer in year one. They will offer their products draft only for the first year with the potential for a limited amount of can releases through the Brew Crew’s mobile canning unit. In year two, they plan on exploring opportunities for packaging their product.

Head Brewer, Ben Romano will first get up-to-speed on the new system by brewing a variety of more “sessionable” beers which will range from styles like pales ales, berlinerweisses and other easy drinking beers that will stay below the 7% ABV mark. Once they get a feel for the market and what accounts and consumers like, they will begin producing some of these year-round. The main goal as Ryan expressed is “We want to make beer, that we like to drink.” Not to worry beer fanatics, Angry Chair also plans to sporadically brew their highly sought after imperial styles including Flambé, Vanilla Coffee Stout, German Chocolate Cake and other big, full flavored concoctions.

Their draft-only offerings will first be distributed to select establishments in the Tampa Bay area focusing on Seminole Heights. “It starts in Seminole Heights. I know it sounds cheesy but it’s a really up and coming area with a lot of art and amazing local restaurants. Beer is an art form and we want to reflect that.” Their beers will also be available in their tasting room. The one thousand square foot space, built in a 1941 building, has a genuine industrial and “homey” feel with an exposed heart pine ceiling and a lot of steel. With Ryan’s background in hospitality, the quality of service is an important element. They will be open 6-7 days a week offering full beers, flights and growlers to go.

Coming from the craft beer industry, Angry Chair understands the importance of picking the right distributor and did their due diligence in making a choice. Ryan Dowdle explains “Being in this business, I’ve worked with every distributor.” He explains that passion is what really set Brown apart in their minds, “Brown’s sales team and management are not only knowledgeable but they hire people that are passionate and who truly want to be in the craft beer industry.” “I also like that it’s a family business and if I have a question, I can pickup the phone and call either of the owners.”

Brown Distributing has expressed “As a family-owned company, we are extremely excited to welcome Angry Chair to our family and look forward to launching and growing the brand in Tampa Bay and the rest of Florida. We believe in Angry Chair’s focus on crafting unique, quality and noteworthy local Florida beers and are eager to get their beers out into the market.”

Angry Chair expects to be open by late Summer 2014 (August/September). Check their facebook page www.facebook.com/AngryChairBrewing and Brown.com for updates.