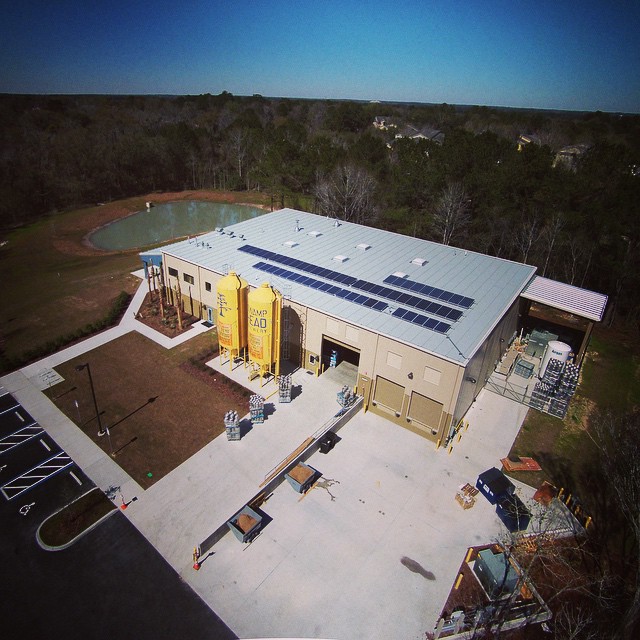 Swamp Head Brewery, one of the original Florida breweries to splash into the craft beer scene, has grown into quite a gem.

Founded in 2008 on the idea of providing Floridians with world-class craft beer and becoming Florida’s brewery, their style and mantra has always reflected the unique culture and natural beauty of the Sunshine State that they call home.

Since their inception in 2008, Swamp Head has grown up quite a bit. The brewery started out on a 10-barrel system, brewing just 700 barrels their first year. With the installation of a four vessel 30bbl system, they are now looking to increase capacity to over 20,000 barrels in their new brewery, says Brandon Nappy, Marketing Director at Swamp Head.

With this increase in capacity they are beginning to increase focus in new Florida markets such as Tampa, Orlando, Jacksonville, and St. Augustine.

The brewery’s award winning year round beers include Wild Night Honey Cream Ale, Cottonmouth Belgian Witbier, Stump Knocker Pale Ale, Midnight Oil Oatmeal Coffee Stout and Big Nose IPA. All of these core offerings are known throughout Florida by craft beer lovers as some of the most consistent, bold and balanced beer coming out of the state.

Since moving into their new brewery in early 2015 Swamp Head has been able to increase focus on the sustainability efforts that they have had their eyes on for years. Working with Solar Impact of Florida, Swamp Head became Florida’s first brewery to harness the power of the Florida Sun via a solar power grid on the roof of the brewery.

“We installed an expandable solar grid, starting with over 50 panels, we plan on adding more in the future,” said Nappy.

Far beyond the use of solar power, Swamp Head does not take sustainability lightly.  From day to day operations to large scale environmentally focused events, Swamp Head works to protect natural Florida and want to do everything they can to preserve it. From reclaiming energy from the brewing process to feeding the spent grain from each brew to local cattle, Swamp Head does whatever they can to reduce their impact.

With an ever growing demand for craft beer throughout Florida, there is one main question that is plaguing craft beer drinkers everywhere.

“When can we take a can of this delicious liquid beachside, poolside or tailgating with us?”

The answer is, not just yet, but hang in there. Swamp Head wants to do it right. “We are taking the can roll out slowly. Focusing on introducing our draft beer to other markets is a main concern at this time, and keeping up with the demand is of utmost importance. We will be there, we promise,” said Nappy.

You can already find cans of Wild Night, Stump Knocker and Big Nose at the brewery and in their home market of Gainesville, but don’t expect six packs to hit the rest of the state in the immediate future.

In the meantime you can expect some seriously tasty draft beer to hit the market over the next few months(see release calendar).

Along with all the new, great things happening out and about throughout the state, they are also always keeping it fresh at the brewery. Keep an eye out for these, and many other, great events coming up!

Swamp Head has also started celebrating Taco Tuesdays. Every Tuesday from 4-8 PM and enjoy some tacos and burritos from Burrito Brother Taco Co.

There are lots of exciting things happening already with Swamp Head in 2016, and we cannot wait to see what the rest of the year brings. One thing always remains the same, and that is they are Inherently Floridian, and their beer is inherently delicious.