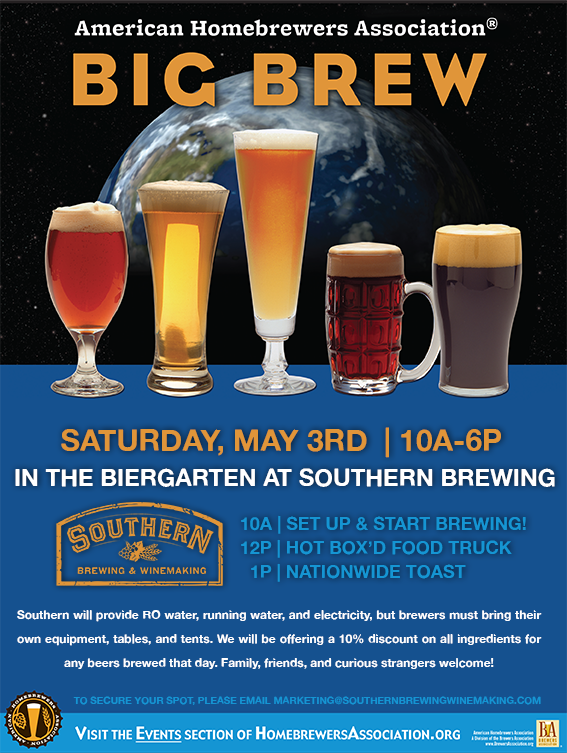 Southern Brewing Participates in AHA Big Brew on May 3, 2014

TAMPA, FL – A celebration of National Homebrew Day, known as AHA Big Brew, is now in its 17th year. Southern Brewing & Winemaking (Southern) will host a local gathering on May 3, 2014.

Organized by the American Homebrewers Association (AHA), AHA Big Brew celebrates National Homebrew Day, honored on the first Saturday of May each year. AHA Big Brew brings together thousands of homebrewers from around the world, all brewing the same beers simultaneously. More than 7,000 homebrewers from North America, Europe, Africa, Asia, South America and Australia are expected to participate this year.

Southern is happy to invite anyone interested in homebrewing to stop by from 11a to 6p on Saturday, May 3, 2014 to join the fun! Local homebrew and beer clubs Bay Area Barley’s Angels, Tampa Bay BEERS, and Special Hoperations will be brewing in the biergarten. Hot Box’d Steamed Cheeseburgers food truck will be onsite, serving food from 12-3:30p, followed by Thai One On food truck at 5p. After the brewing ends, the party will continue inside the taproom where local band Monarch will play a live show.

On May 3, friends and family gather to brew one or all of the three AHA Big Brew recipes. At 1p Eastern Time, homebrewers raise their glasses of homebrewed ales and lagers for a simultaneous toast to homebrewing, a hobby that hundreds of thousands of people around the world enjoy.

“AHA Big Brew isn’t just about beer—it’s about companionship, friendship and the shared love of flavorful beer. This is a special day for those homebrewers who have been crafting their brews for those whose company they enjoy and cherish,” said Gary Glass, AHA Director.

For more information on AHA Big Brew, please visit the Events section of HomebrewersAssociation.org or homebrewersassociation.org/pages/events/national-homebrew-day.