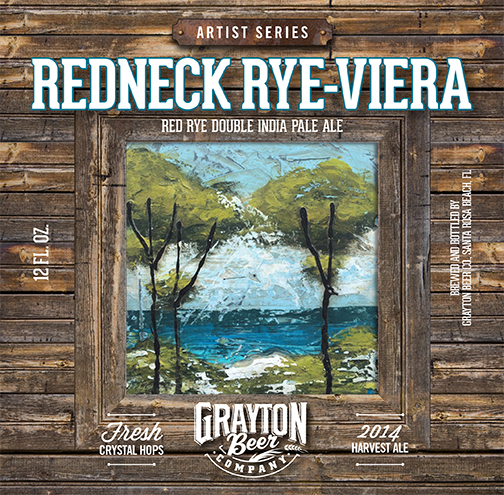 With an alcohol by volume (ABV) content of 8.1 percent, the new Redneck Rye-viera beer was crafted with 800 pounds of fresh crystal hops added to three different types of rye. The beer is brewed with Oregon hops that were shipped to Grayton’s home in Northwest Florida for brewing within 24 hours of harvest. The rye spiciness and warming alcohol make the red rye double India Pale Ale (IPA) perfect for cooler winter weather. However, because it is a seasonally brewed harvest ale, it will only be available in bottles and draught for a limited time.

“This harvest ale is a very special red rye double IPA,” says Head Brewer Brad “Shank” Shankwiler. “Getting the hops from Oregon and brewing them within 24 hours while they’re still pure and fresh gives Redneck Rye-viera a distinct floral and aromatic hop profile. Then we add in a robust malt bill and hints of spice from rye malt to provide a truly unique drinking experience that pairs perfectly with cool weather and camp fires. This hop profile is only achievable once a year during the hop harvest, so try it while you can.”

Redneck Rye-viera will be available this week in select locations that carry the South Walton brewery’s other beers. Redneck Rye-viera is also a part of Grayton’s Artist Series, where a portion of the proceeds will go toward art-based initiatives and charities in the Panhandle. Grayton’s Artist Series is a challenge Grayton Beer put out to local artists to design selected labeled beers. The artwork used on the Redneck Rye-viera label was created by Allison Wickey, a South Walton artist who used the trees, blue waters and white sugar-sand beaches to depict the local landscape that is commonly called the Redneck Riviera.

“We live in an area that is rich with artists, photographers and musicians, and we wanted to pay tribute to this by displaying artwork on our bottles in place of a traditional bottle label,” says Grayton Beer Company President Jamey Price. “We’re excited about Redneck Rye-viera and Allison’s artwork and look forward to displaying additional great local artwork on future artist series labels.”