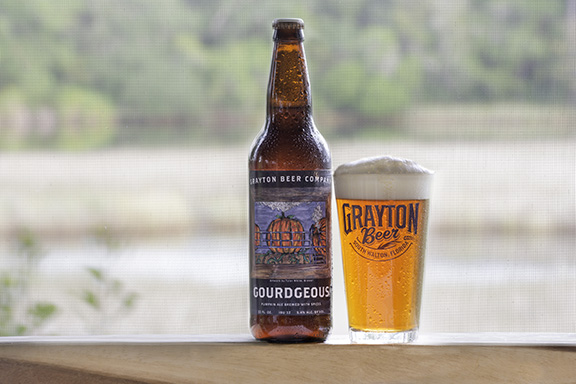 With an alcohol by volume (ABV) content of 5.4 percent, the new Gourdgeous beer was crafted with 300 pounds of fresh pumpkin pulp added to a classic ale base then delicately spiced with fresh ginger root, coriander, allspice and cinnamon sticks.

“This beer is perfectly balanced and will pair well with whatever fall fare you may choose,” says Head Brewer Brad “Shank” Shankwiler, who created the recipe for this beer. “This is one of my favorite recipes, and I look forward to brewing it every fall. I get a lot of people who don’t often like pumpkin beer, but Gourdgeous has light and subtle nuances of pumpkin without the overbearing taste. It was also such a beautiful looking beer, so I decided to call it Gourdgeous.”

Currently in draught in various bars and restaurants, Gourdgeous will also be Grayton’s first brew offered in 22 oz. bomber bottles, which will be available this week in locations that carry the South Walton brewery’s other beers. Gourdgeous will also be the first in Grayton’s “artist series” – a challenge Grayton Beer put out to local artists to design selected 22 oz.-labeled beers. The artwork used was created by Grayton Beer’s own brewer, Tyler White, and is a play on Grayton’s brew system using pumpkins in place of brewing vats. A portion of the proceeds will go toward art-based initiatives and charities in the Panhandle.

“We live in an area that is rich with artists, photographers, and musicians, and we wanted to pay tribute to this by displaying artwork on our larger bottles in place of a traditional bottle label,” says Grayton Beer Company President Jamey Price. “We’re excited about Gourdgeous and the artist series and look forward to displaying additional great local artwork in the future.”

Grayton Beer Company currently offers five other beers in its list of brews that range from the Amber Ale, which carries the name 1890 Founder’s Ale, the Belgian White, or Witbier, named White Dunes, the Pale Ale, Grayton’s flagship product – the Original, to the 30A Beach Blonde Ale, which incorporates 30A.com’s iconic blue logo.

For more information or to reach Shankwiler or Price, please contact Audrey Pannell at (205) 503-5955 or audrey@styleladvertising.com.