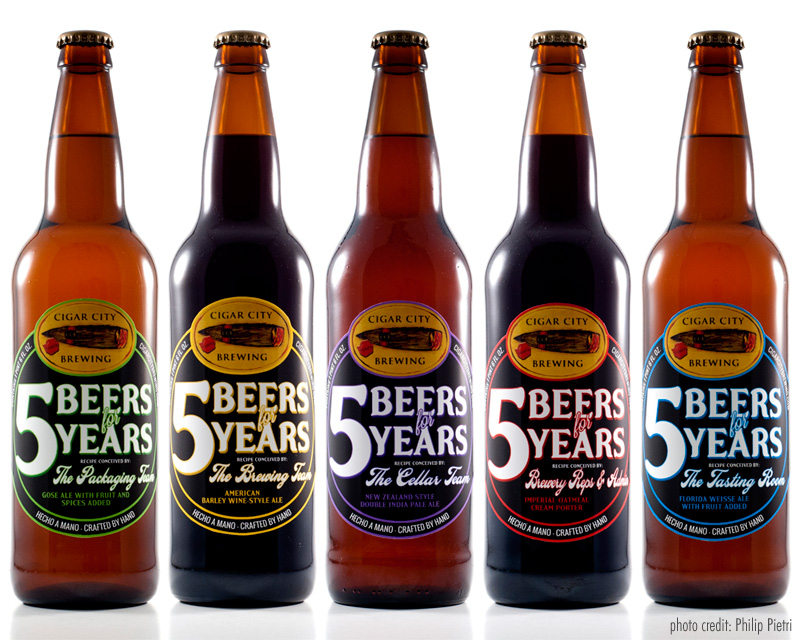 (Tampa, FL) – Cigar City Brewing is issuing a special batch of beers in honor of its fifth birthday. The brewery, which sold its first beer March 9, 2009 has never celebrated its anniversary with a special beer release but will make up for it by releasing “5 Beers For Five Years,” a series of five different beers, each one conceived entirely by each of the five departments in the brewery.

“The last five years have been a blur, a whirlwind of constant and rapid growth,” said Wayne Wambles, Cigar City Brewmaster. “Meeting the increased demand has been a point of frustration that we are finally able to accommodate.” Cigar City Brewing founder Joey Redner echoed a similar sentiment regarding five years of growth, “We’re here and we’re going strong. It’s really cool that we’ve been embraced locally as well as internationally. It’s humbling.”

The 5 Beers For Five Years series will be released simultaneously. Each beer will be available in the Cigar City Brewing Tasting Room and Cigar City Brewpub as well as in very limited distribution around the first week of March.

Cigar City Brewing opened its 15 barrel brewery in Tampa, FL in 2009 as the city’s only small-scale production brewery. From the beginning, the brewery’s marketing focus was a celebration of Tampa history and culture as reflected by brand names that reflect local cultural touchstones such as Jai Alai IPA, Maduro Brown Ale and Tony Jannus Pale Ale. From the days of the Tocobaga, the pre-Columbia native inhabitants of Tampa Bay, through its years as the world’s largest producer of hand-rolled cigars, Tampa has witnessed many monumental changes and Cigar City Brewing’s mission is to brew beers that reflect the complex and diverse elements that make Tampa the dynamic city it is today.