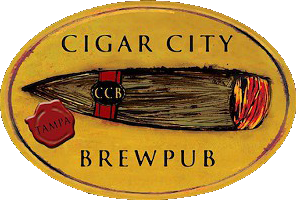 Cigar City Brewpub opened April 1st 2013 with the simple goal of giving Tampa great food to go with great beer. Our menu is a little Cuban, a little Southern, a little Italian and all Tampa. We aim to provide a welcome and casual environment for our guests to enjoy a good time with their friends and family.

OUR BEER
Head Brewer Tim Ogden has been brewing in the Tampa Bay Area for many years, most recently as the lead brewer at Cigar City Brewing’s original production facility. In addition to being on CCB’s award-winning brewing team, Tim developed the recipe for Tocobaga Red Ale for which he received a Grand Champion Award in the 2012 United States Beer Tasting Championship, as well as Moat Water, the anniversary beer for Skate Park of Tampa. For Cigar City Brewpub, Tim has designed a unique line of ales built around his favorite Belgian yeast strain, forbidden fruit.